Continuing on the path to discover how God So Loved the World, He Gave the Zodiac we will start with the question we ended with in Part 2.

The term house is alternatively associated with a temple or zodiac, and as we investigate the house Christ referred to, will we find ourselves entering the bhavas or house of Aquarius?

“In my Father’s House there are many mansions…”

As we follow the passages of time, we can look back to see where the apparent King was previously found; leading us to where we can find him the next time.  In laboring to answer the question appropriately, we turn our telescopes back to Pisces, where written accounts of the Cosmic King is said to come to earth. In doing this we must consider some solar events propelling the Magi to the place where this great King would be found, the first time. 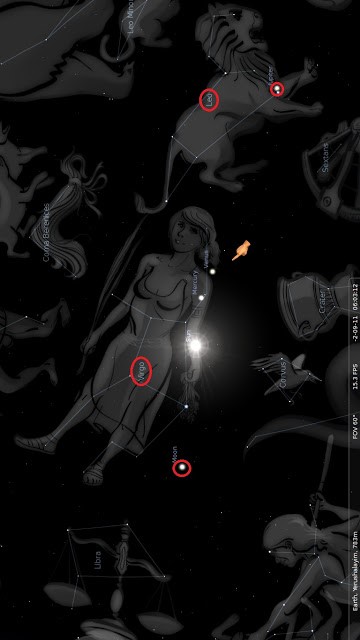 A great sign appeared in heaven: a woman clothed with the sun, with the moon under her feet and a crown of twelve stars on her head. 2 She was pregnant and cried out in pain as she was about to give birth…”

Peering into the past, we will come to a beginning of something, perhaps the story of stories, starting in Virgo.  The Sacred Text (Bible) refers to this sign in the outer-space, appearing as a woman. Adding elements of the sun clothing her, or covering her with its light, and the moon standing under her feet, with 12 stars crowning the top of her head.  Tradition accepts this constellation as the Virgin-Maiden (Mary); depicted conceiving and bearing the Promised Seed (Sun of Righteousness), and revealing the arrival of the King of kings.

12 shining stars consisting of the constellation Leo (The Lion King) sit above her head as a signature symbolized with a crown, honoring the mighty and cosmic king as he enters the room/house/tabernacle.

Recorded accounts place the grand entry as one that brought honorable notability from distant lands, declaring the king entered in the earth.  Just look at how Jupiter (Zedek) displays Revelation 12 as it travels through the womb, leaving Virgo to give birth to the Moon, culturally referred to be the celestial object with no light of its own, only a reflection of the true light source, the sun.  We continue star trekking what is written by glancing at Jupiter before we journey into the future, where we will meet the “One Who Goes and Returns” (Cygnus).

As if marrying science and the Bible in Holy Matrimony, we see the science community illustrates this story in a stellar manner, connecting like constellations to the mind.

The symbols or signs applied from these stories, even to its Christian roots, seem to be pointing to the grand appearance and presence of a mighty King.  So mighty, our solar system depicts this through a mighty gas giant, who takes blow after blow of astrological exorbitance. The solar matter is set on a path to take out earth in the celestial battle of the cosmos.

Why?  Great question!  Outside of the sun, Jupiter is the planet which actually leads the solar system and communicates through mnemonic zodiacal messages about a marked time.

Click the Video Below to learn more about scientific discoveries about Jupiter!

According to the documentary video Horizon: Secrets of the Solar System, a few things stood out:

With outstanding paralleling characteristics, Jupiter appears to announce the arrival of this King to our planet; through even its own celestial characteristics.  The anciently known Arabic king-star Regal (Regulus) dances in a cosmic coronation with the King-planet Jupiter, even appearing to touch in a star-spangled triple conjunction.  The trinitarian conjunction of the king planet rendezvousing with the king-star, forming a halo, with a crown of 12 stars found above the Virgin Mary’s, head in the king Constellation Leo, further validates its call to attention, as if sealing its fate and identity.

Upon first finding the King of the beginning and the end, we find him in the past, with astronomical activity heralding a Kingly entrance; virtually singing his praises from above.  We also discover a time, wherein it says, “Behold, I have come (in the scroll of the book it is written of me) to do your will, O God.” (Hebrews 10:7). Thus, the timing to the change on the clock as Virgo rounds the ecliptic in her astrological hour, striking the Piscean year/age at hand, and a king comes masked as Messiah-Ben-Joseph, a lowly servant, hidden in a manger, where the multi-cultural Magi group would follow the starry coronation to his place of arrival.  The One who goes and returns will be found next entering in the “Bhavas” of Aquarius.

“For centuries Bible scholars have debated the identity of the woman in Revelation 12. Some say she represents the nation of Israel, others say the Church and some say the Virgin Mary.”

“Many believe that an astronomical alignment involving the constellations Virgo and Leo, the sun, moon, and planets Mercury, Mars, Venus, and Jupiter occurring in September 2017 fulfill this prophecy word-for-word.  Preceding this alignment is the 2017/5778 Feast of Trumpets, which in Jewish tradition is believed to be a day when the dead will be resurrected and judgement will begin, while many Christians believe the period describes the Rapture (translation) of the saints and/or the Tribulation period described in the Book of Revelation.”  https://jerusalemchannel.tv/2017/09/22/revelation-12-sign-rorschach-tests-in-the-skies/